Since listing on the ASX in January 2019, the share price of broadband provider, Uniti Wireless (ASX:UWL) has enjoyed spectacular growth. From an IPO price of 25 cents, shares have rocketed to $1.60, with the business growing via consolidation. The upcoming merger with OptiComm Limited (ASX:OPC) will make the business even stronger.

Following six acquisitions between April and December 2019, the team at Uniti spent the ensuing six months focused on two objectives. Firstly, they needed to consolidate these acquisitions, and second, they were running the ruler over the merger with OPC, which was announced in mid-June 2020 and expected to be consummated in September 2020.

Whilst the pro-forma revenue for Fiscal 2020 was below expectations at $70 million, its EBITDA surprised on the upside at $38 million, with an exit run-rate of $41 million. This was an extraordinary result given the underlying economic environment over recent months, as well as the net operating cash flow (pre- capital expenditure) of $10.1m in the June 2020 quarter. 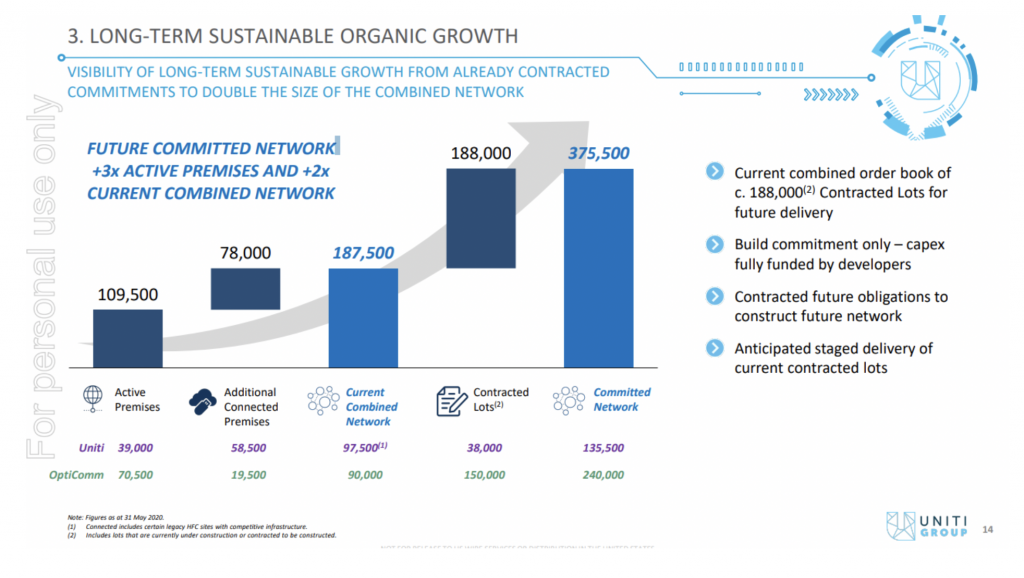 Fast forward to Fiscal 2022, the first full financial year of the combined business

Excluding any further acquisitions (unlikely), could UWL achieve revenue of $200 million and EBITDA margins of around 60 per cent? We think so.

Assuming the net operating cash flow comfortably exceeds capital expenditure, it seems likely net debt could decline to $50 million (or below) from the current theoretical $112 million. (Again, this assumes no acquisitions).  If this scenario played out, the company (at $1.55 per share) could be selling on an enterprise value ($984 million) to EBITDA ($120 million) ratio for Fiscal 2022 of 8.2X.

In an environment of close to nil interest rates, this seems too cheap to me, and a target of closer to $2.00 per share appears achievable.

To read my previous article on Uniti Wireless, click here.

The Montgomery Small Companies Fund own shares in Uniti Wireless.  This article was prepared 04 August with the information we have today, and our view may change. It does not constitute formal advice or professional investment advice. If you wish to trade Uniti Wireless you should seek financial advice.