The COVID quake may have structural aftershocks: Part I

The drivers of this phenomenon are somewhat intuitive, with companies predominantly advertising their products and services to stimulate demand or build awareness with potential customers. When the economy is strong, unemployment is low and the consumer is looking to spend, companies try to lure some of these dollars with advertising. This phenomenon however is a double-edged sword which quickly goes into reverse when the economy is weak, unemployment rises, and the consumer is saving instead of spending (i.e. companies pull back on advertising). While advertising is cyclical at a macro level, there is a major structural change that has been occurring within adverting itself for over two decades, namely the shift from offline advertising (TV, print, radio, outdoor, etc) to digital advertising (Google, Facebook, Amazon, etc).

The shift to digital has laid waste to physical advertising mediums (print, direct mail, outdoor, etc) with their market share falling from around 70 per cent in 2010 to less than around 25 per cent now (2020), however TV advertising has been largely insulated from the migration and in fact has increased market share alongside the massive growth digital advertising.

Somewhat counter intuitively against this robust revenue picture for TV, viewership has actually been in sharp decline since 2010. In fact, overall TV viewership is down more than 20 per cent (based on the broadest industry standard “P2+” which consists of “all people watching TV at anytime”).

In fact, when one breaks down the demographics of viewership, the situation is even more frightening for TV, with 18-24 year old viewers down more than 60 per cent and the highly lucrative 25-34 year band down approximately 50 per cent as well. Even kids under 17 are fleeing the TV medium for alternate channels and have dropped by more than 50 per cent.  However, TV remains popular with the older generation, with viewers 55 years and older representing more than 50 per cent of all viewers, an increase from around 30 per cent in 2008.

While viewership may be down dramatically, old-school advertisers continue to believe it is an excellent medium to create brand awareness and also generate uplift for other advertising mediums (e.g. digital search volumes increase with more TV commercials). This dynamic may partly explain why TV has managed to increase its dollar share of the market despite ratings drastically falling. That said, one would think that this situation cannot go on forever, and eventually advertising dollars will shift with eye balls (i.e. viewership). 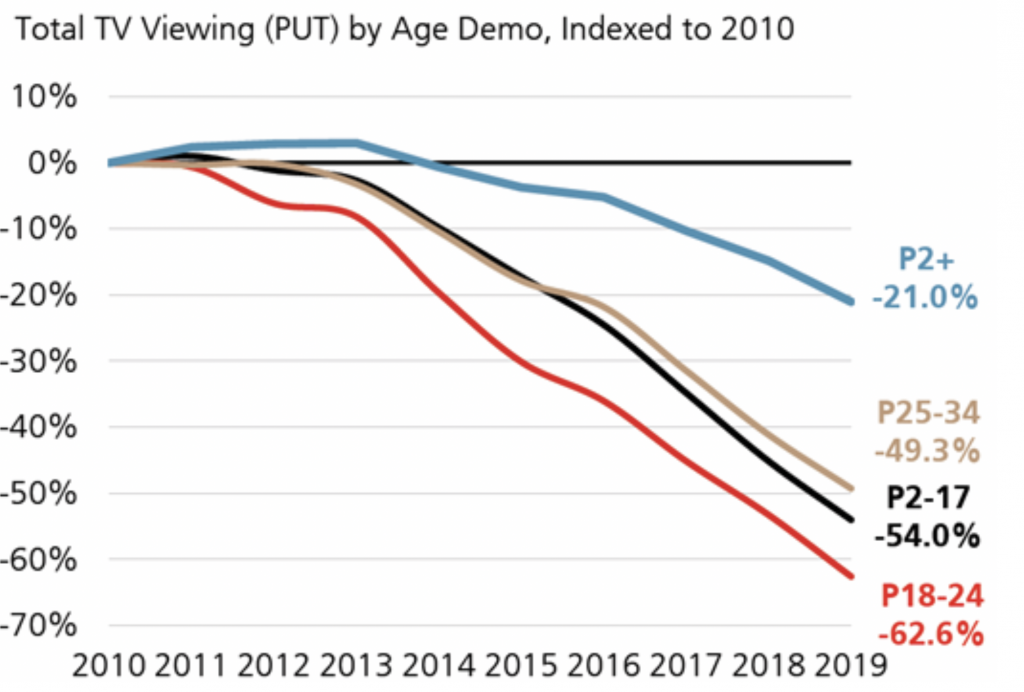 As we mentioned earlier, advertising at the macro level is cyclical, hence it is informative to look back at the last major recession we experienced and lift out any useful insights. In the aftermath of the 2008/2009 global financial crisis, total advertising revenue fell by more than 10 per cent and didn’t recover to pre-recession levels (2007) for nearly four years (late 2011), however both TV and digital advertising were beneficiaries, with ad buyers cutting back on traditional mediums (print, outdoor, radio, etc) and increased allocation share to TV and Digital. In fact, the recession accelerated what was already an emergent trend, with traditional mediums losing 14 percentage points of market share from 2007 through 2011. During this period the effectiveness of digital/TV was validated, hence it is no surprise that traditional advertising never recovered and have failed to grow revenues ever since. 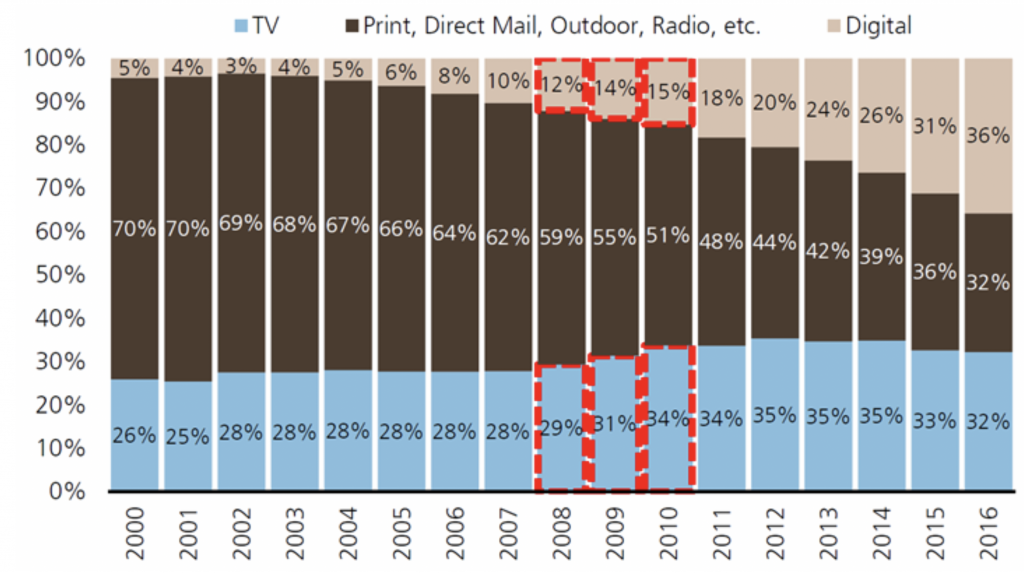 In part II of this series we will examine which pieces of the media ecosystem are performing better, where audiences are shifting and our conclusions around the potential for an acceleration of the structural migration of advertising dollars (particularly TV) into the digital sphere.

The Montgomery Global Funds and Montaka own shares in Alphabet and Facebook. This article was prepared 03 June with the information we have today, and our view may change. It does not constitute formal advice or professional investment advice. If you wish to trade these companies you should seek financial advice.