US Economy Risen by Easter?

Earlier this week US President Donald Trump started to raise hopes that restrictive measures being taken to slow the spread of the novel coronavirus would be lifted soon and the economy would be restarted by Easter. Short of a miracle, we can’t see this happening. In fact, there’s a good chance the US is even more closed then than it is now.

The US has been slow to test and slow to act, and that has made the coronavirus epidemic worse there than it needed to be. This means that measures will need to be tougher and left in place longer to avoid overburdening the hospital system and making the problem the worse.

Take a look at the chart below. It shows the emergence of coronavirus cases in the US, China and South Korea since the first case was discovered in each region. The US is furthest to the right, that’s because it took a long time to start testing. Without being able to identify who had the virus it was able to spread and now the growth in cases is quicker than in the two Asian nations. You can see the US curve is steeper.

The US curve is also pretty straight (on a log scale) showing that the growth rate has not yet begun to moderate. By contrast, China and South Korea bent their curves by taking aggressive measures like isolation, quarantining, and distancing which slowed the spread dramatically. 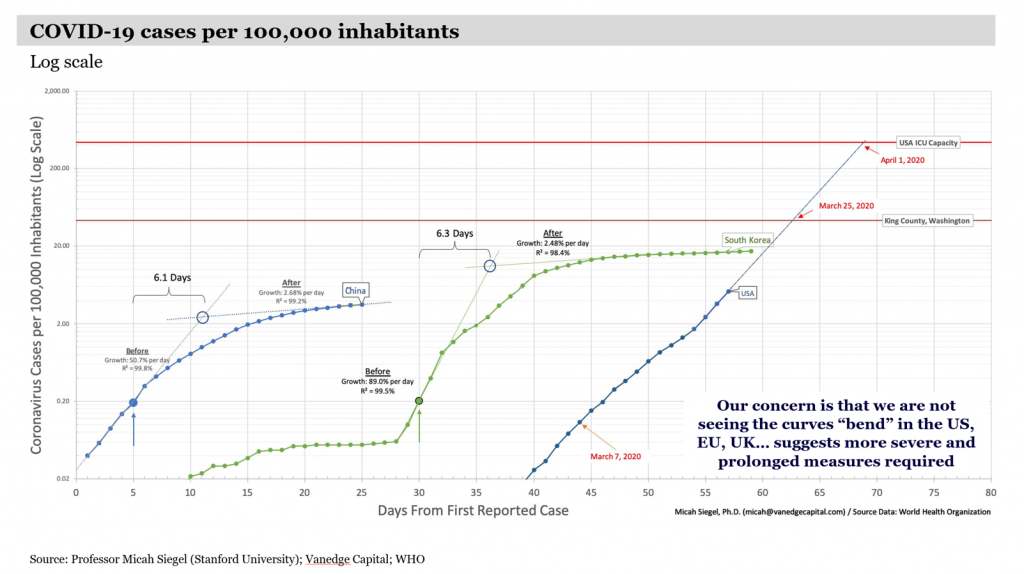 Now the US needs to do the same. But its starting point is far worse and its fuse far shorter. The deep red horizontal line is the critical limiting factor – the point when the US hospital system becomes stressed because demand for critical care, or ICU, beds exceeds capacity. The estimated date is April 1, less than two weeks before Easter. We hope for all US residents that the curve bends hard below the red line and quickly. But almost the only way to achieve that is by enforcing tougher measures, not opening up the movement of people to restart the economy. That’s the unfortunate trade off that Trump may be underappreciating.