The case to invest globally just got stronger

Right now, there’s no shortage of analysts cautioning investors that equities are over-priced, given that many businesses are sitting on elevated, if not euphoric, multiples. But looking more closely, is it the right time to switch out of cash and into global equities?

Recently Andrew Macken from the Montgomery Global Fund, presented an argument for expecting equities to remain supported. The first point is that in May and June, global inflation expectations fell suddenly, dragging down global bond yields. The fall also coincided with a break-down in talks between US and Chinese trade negotiators as well as an increase in US tariffs on Chinese imports.

The second point is that expectations for US short-term rates have turned 180 degrees. A year ago expectations were for the Fed to be hiking rates.  At Christmas, Fed policy makers indicated they would consider financial markets in their decision on rates, hinting strongly that a pause was warranted on rates. Following more recent comments from the Fed the market is now forecasting rate cuts with 100 per cent probability. Effectively, the market has gone from expecting a rate hike with 80 per cent probability back in October 2018, to 100 per cent probability of a rate cut today. Of course, if markets were wrong back in October, they could be wrong today, but what if they are right?

The third point is that both the ECB (European Central Bank) and the US Fed have both indicated that rising downside risks justify stimulatory policy settings. The ECB announced “additional stimulus may be required” and the Fed announced it will act “as appropriate to “sustain the expansion.”

It’s worth remembering the old adage “don’t fight the Fed.”

The fourth point is perhaps the most interesting; the Fed’s median forecast for real US GDP growth has increased since March this year.

The conclusion is that the Fed has moved to an easing bias in rates amid heightened downside risks rather than evidence of weaker economic growth. But what if the downside risks don’t materialise? And what if Trump and Xi reach a deal?

In that case, the major central banks would be engaged in coordinated stimulus amid economic conditions that do not require as much stimulus as is being manufactured – it’s a thesis that could be very bullish for equities irrespective of their valuations.

Elsewhere, we have been commenting recently about the very high multiples being paid in private equity.

Half way through 2019 and Pitchbook note in their latest quarterly US PE Breakdown Report that buyout multiples in the US remain above 12x (using Enterprise Value/EDITDA) on a median basis. Quarterly readings from 2015 to early 2016 were in the 9.3x to 10.5x range, with multiples gradually building over the past few years. 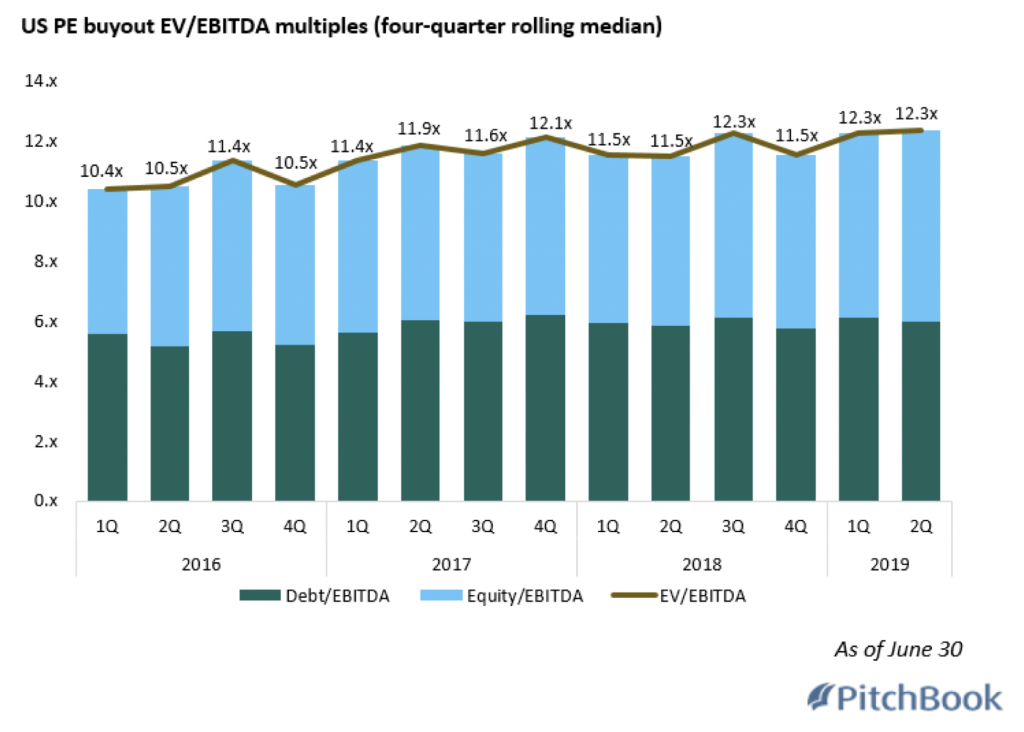 Though widely accepted as high, expectations of lower rates and reasonable growth have investors becoming accustomed to such buyout multiples.

In keeping with the Montgomery Global Fund team’s thesis, Pitchbook reckons there are a few reasons to think that the market “will now normalise 12x medians and build its way toward normalising 13x”.

Reason one is the expectations of a Fed rate cut. Two, the public equity market just recorded the strongest first half since 1997. Three, “Prolonged levels of lower rates will help PE general partners mitigate financing costs and allow for richly-priced bids” – in other words, funding is cheap and fuels competition for target companies. And finally, deal sizes are up quite a bit, too—the $276 million median through 1H was 45 per cent higher than the $190 million median seen last year.

With many more potential investment candidates globally than are available at reasonable prices in Australia, the thesis explains why reduced cash and increased equity exposure is currently the name of the game globally.