How to reduce the interest rate on your mortgage

A new report by the Australian Competition and Consumer Commission (ACCC) has found that, as a whole, Australians are paying too much interest on their mortgages. How much too much? Well, according to a conservative estimate, as a nation we are likely paying at least $10 billion per year more than we need to. Thankfully, there are steps to take to get a better rate.

Back in September 2018, I published a blog that showed that mortgage holders on average were very uninformed about the finer details and features of their mortgage despite it being most likely the biggest financial commitment they have in their life.

As background, banks extending mortgages generally have a standard variable rate that they publish on their website but there are also always deals in the market where they offer more attractive interest rates than this to win new customers and gain market share. This means that there can be a significant difference between the interest paid on loans in the “back-book” of old loans and the interest paid on loans in the “front-book” of new loans.

ACCC has in its report investigated what this difference in interest rate is and the numbers are large:

The older a mortgage is, the higher the average gap in interest rates as can be seen from the chart below: 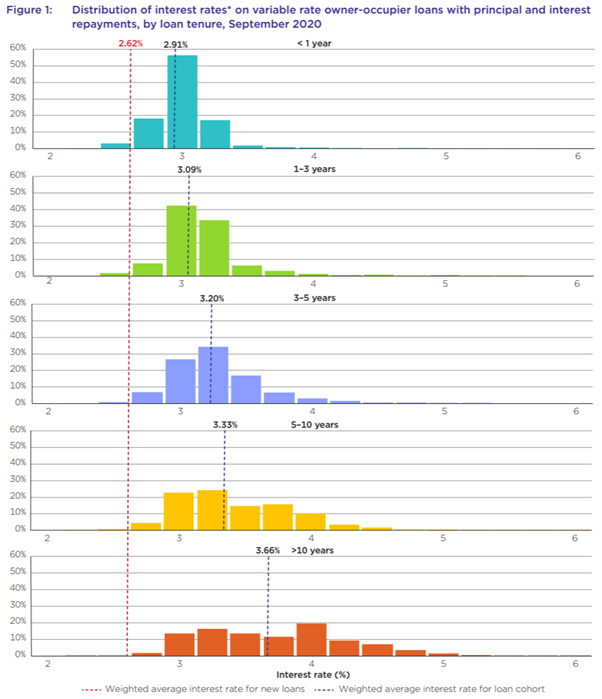 To exemplify the impact of this, if we assume a mortgage of $250,000 that is 4 years old, and paying (on average) 58 basis point higher interest than new loans, the borrower would save about $1,400 per year in interest payments and if the remaining life of the loan is 25 years, the net present value of the interest savings would be over $17,000, both quite substantial numbers. This of course scales linearly with higher loan balances and larger difference in interest rates compared to the 58 basis points assumed. It is easy to see that we are talking about substantial numbers if we aggregate it up over the total Australian mortgage debt of approximately $1.9 trillion.

If we were to very conservatively just scale up the $250,000 loan to $1.9 trillion in total, it indicates that Australian borrowers are paying at least $10 billion per year too much in interest. To put this into perspective, $10 billion is equal to about 3 per cent of total retail spending during the last 12 months. This is money that is hence wasted for consumers and instead accrues to banks and other lenders.

There are a number of reasons why this situation persists:

As part of the report, ACCC makes a couple of recommendations out of which by far the most important is they want to force lenders to prompt each borrower with a loan that is older than 3 years on an annual basis about the benefits they could get from switching to a loan with the average current interest rate on a loan with similar features as their existing loan.

This would of course not be in lenders’ interest so I suspect that there will be a lot of lobbying efforts towards politicians not to implement this. To see the impact on the major banks earnings if it was to be implemented and customers react and reprice the back-book of the banks, Credit Suisse helpfully published this table showing that it could have an impact of 6-9 per cent on their bottom lines. 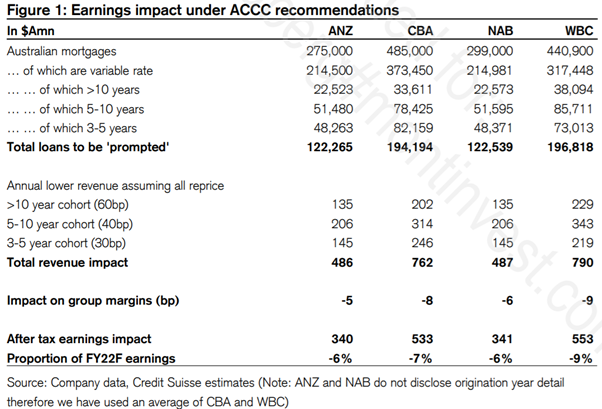 This is the worst-case scenario with all their customers repricing their loans (but not closing the full gap to new rates) and we should not expect that to happen but it shows that there is substantial savings for households to access if they take notice and act.

I guess a good finish to this post would be a recommendation to go to a couple of banks or mortgage brokers homepages and type in your current loan balance and compare the outcome to what you are currently paying as you might be able to save quite substantial amounts of money and remember that you do not necessarily have to go through the hassle of changing lender as you might be able to use this information to negotiate down your current lender without having to go through a new credit assessment process.