Home » Investor Insights » Latest Insights » How much worse can it get for REITs?

How much worse can it get for REITs?

The COVID-19 crisis – with the accompanying lockdown – has had a severe impact on many real estate investment trusts (REITs), particularly those exposed to discretionary retailing. The question is: have plummeting share prices opened up investment opportunities, or is there more pain to come?

At the beginning of the COVID-19 market sell-off Roger’s idea of keeping our spirits up was to play the Carpenter’s “We’ve only just begun.” Bear Heaven. Apologies if you are going to walk around all day humming that tune, we’ve been there, but it’s where the REIT sector is now….

Spanked. Royal (fund manager technical term).  REITs are down 35 per cent from the market’s February pre COVID-19 peak, versus the market which is 25 per cent down. What the??? How did that happen. 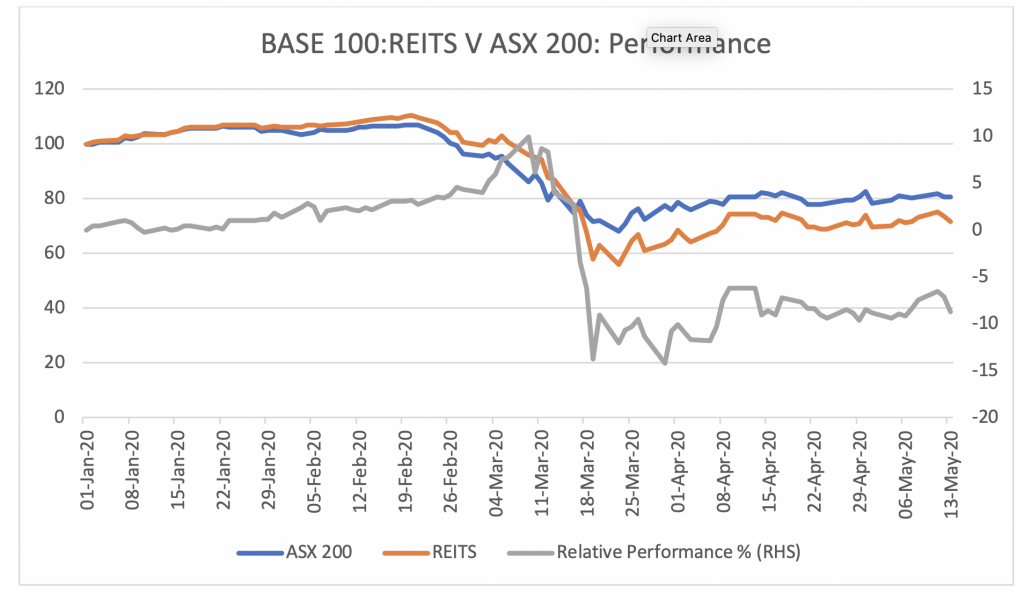 Full disclosure: we are biased; REITs are our biggest underweight. It’s almost 13 per cent of our benchmark, the Small Ords Index. Still 13 per cent, despite the spanking.

Dominic and I want to buy great companies with a sustainable competitive advantage, in attractive markets, run by talented management. We want that valuation creation destiny to be factors we can due diligence factors specific to the company and with management firmly in control of those value creation levers.

You get the picture. Generally (as it’s probably dangerous to get too specific and we are careful to say in our opinion), the value creation event we have observed in REITs has little to do with competitive advantage or management. It’s almost all down to externalities, the things that management can’t control, value creation is not driven by the known knowns, but the unknown unknowns.  Donald Rumsfeld explains this principle here (an attempt to bring some cheer to this blog).

And this reliance on external value creation has driven some bad habits. The ideology we observe in most of our REIT management teams in our investment universe is to simply collect rent and contemplate what positive nominal revaluation factor to re-value the assets in their portfolio up by and call that NTA.

These businesses are set up for good times, where, as global interest rates fall, the value of their assets “automatically” go up. It’s lazy thinking, and it brings risks. These risks are being paid for – the REIT sector has been one of the largest in the recent rush to raise capital (just like in the GFC – rinse and repeat). And there is more still to pay, the sector is just trying to work out the bill. But it’s going to come in the form of lower income and rising cap rates (yowsers!) and those inexperienced yield seekers are going to get diluted in the placement that’s required to size the capital structure for the new future.

“Unknown knowns, that is to say, things that you think you know that it turns out you did not.”

Let’s consider the current standoff between the retailers and their REIT landlords. In our experience good businesses aren’t built on taking advantage of their customers. Retail landlords stand accused of having structurally done that, and for a long, long time. Retailers make the case that their economics have been squeezed by rental growth, and terms that see landlords participate in the upside whilst retailers take all the downside. We’ve seen many REIT management teams defend this with little more than a shoulder shrug, and a comment “you’d expect them to say that wouldn’t you.” True. But behind that truth there is a problem, and REIT’s generally have chosen to ignore that problem, to exercise power over their tenants rather than cultivate their health. We’ve seen this position of power exploited before, like in the franchisor/franchisee model. Extracting value in the short run to the detriment of the health of your long-term business driver ends badly.

We are now at a tipping point in that relative power between Retailer and Landlord. Retailers have been preparing for this recessionary moment for years, they have been holding over leases, instead of signing new ones when their tenancy expires. This means the retailer has run the risk of being turfed out at short notice, if the landlord finds a new tenant willing to sign up for longer.  Nevertheless, it’s short-term pain for long term gain.

That moment is here, courtesy of COVID-19 and the associated recession those holdovers are now ammunition, to the gun of online retail.  It’s not just Retail – what about office REITs?  Here there are strong parallels, just different details. WFH, Work From Home, entered the Urban Dictionary in June 2018. In March 2020, it entered the boardroom of the office REITs, the corporate enterprise and the worker has now understood the power of technology in the context of work location like never before. What will the office REIT’s do?

Well, unfortunately the data suggests they’ve been taking advantage too – look at that rent growth.  The argument of course is that new capital has gone into the premium end and that needs to be recovered but look at A-grade (the next tier down). Yep pay more for the same. We could suggest another WFH acronym…Prizes for the best one?

How we got here, pragmatism and the future?

He’s cunning that Dominic Rose. “Maybe we should write about REITs, it’s our biggest under-weight, what do you think?”

He set me off on a rant he’s heard a thousand times already. Literally I asked for what came next. “You should do it then.” Ouch.

I mean who wants to write about REITs. Give me the innovation and creative destruction of technology any day. But writing the above needed to be done.

Because it sets the scene for the future. One where we could seek to invest in these REITS, where the risk profile has diminished and an opportunity gap opened.  One where the risk of reset of terms of trade between landlord and tenant has already occurred, duly cleansed by the shift of that balance of power between parties to something more neutral and economics of the relationship rebased by recession, on capital structures already re-cast for the likely future.

Rates are after all, likely to be lower for longer, and the clamour for income will grow stronger still. Those yield seekers aren’t going away.