Bank investors – your dividends could soon be put on ice

Each day the coronavirus pandemic sets another domino to fall. The latest could be bank dividends. It’s now very likely that our banks will cut – or even postpone – their dividends this year. If they do, it will be a major blow to many retail investors and retirees.

On the back of last week’s announcements by regulators in the UK and New Zealand that will prevent their banks from paying dividends for the foreseeable future, the Australian Prudential Regulation Authority (APRA) issued the following statement last night:

“APRA expects ADIs and insurers to limit discretionary capital distributions in the months ahead, to ensure that they instead use buffers and maintain capacity to continue to lend and underwrite insurance. This includes prudent reductions in dividends, taking into account the uncertain outlook for the operating environment and the need to preserve capacity to prioritise these critical activities.

During at least the next couple of months, APRA expects that all ADIs and insurers will:

During this period, APRA expects that ADIs and insurers will seriously consider deferring decisions on the appropriate level of dividends until the outlook is clearer. However, where a Board is confident that they are able to approve a dividend before this, on the basis of robust stress testing results that have been discussed with APRA, this should nevertheless be at a materially reduced level. Dividend payments should be offset to the extent possible through the use of dividend reinvestment plans and other capital management initiatives. APRA also expects that Boards will appropriately limit executive cash bonuses, mindful of the current challenging environment. “

While APRA is not explicitly saying the banks cannot pay a dividend, it is urging them to retain capital to ensure that credit remains available even if loan losses increase materially.

This morning Bank of Queensland has announced that it has deferred its decision on paying dividends from its interim results by up to six months.

The major bank stocks have a high proportion of shares held by retail investors, who tend to place more emphasis on dividends as a core investment case than institutional investors. As a result, the risk to dividends for the foreseeable future could see increased selling pressure from retail shareholders. Retail shareholders could look to switch into other yield producing securities such as bank hybrids. 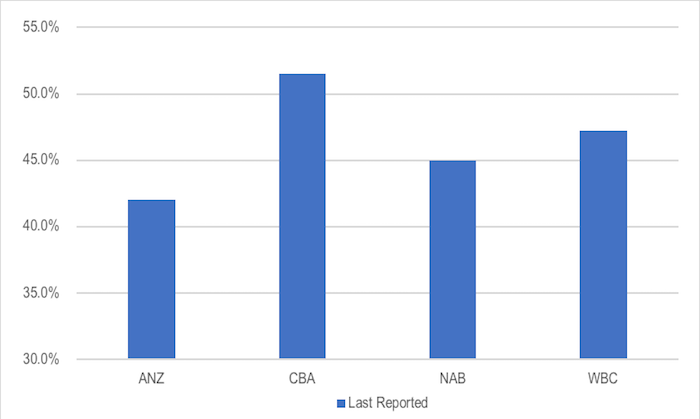 All of the major banks have relatively high levels of retail investor ownership, with CBA and Westpac being slightly higher than NAB and ANZ.

The degree of risk to upcoming dividends for each bank will depend on the amount of capital they hold, and their potential exposure to growing bad debts from the likely coming recession.

If we look at each bank’s capital position, CBA is clearly in the strongest position, while NAB is in the weakest. NAB is likely to boost its capital position at some point in the future with the sale of MLC; however this is far from guaranteed. 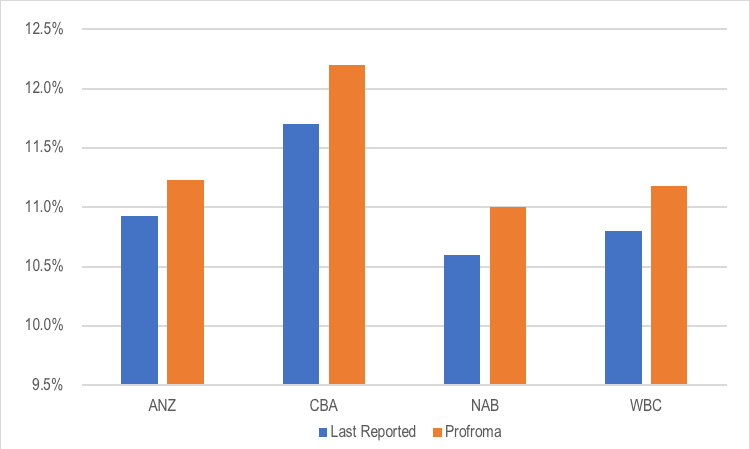 The potential for bad debt provisions to eat into CET1 capital (i.e. the numerator) both now and in future periods impacts a bank’s ability to pay out capital as dividends. This is likely to show up more quickly in business lending than residential mortgages, so NAB and ANZ are more at risk.

Putting this together, NAB and Westpac are at the greatest risk of a cut to dividends starting from the interim dividend announcement in May given their lower CET1 capital positions. The higher exposure of NAB and ANZ to business lending adds to their risk of a dividend cut or suspension.

The best placed to weather the storm is CBA, but there is still no guarantee that it will be able maintain its dividends in the near term.

The Montgomery Fund and The Montgomery [Private]  Fund own shares in CBA and Westpac. This article was prepared 09 April 2020 with the information we have today, and our view may change. It does not constitute formal advice or professional investment advice. If you wish to trade CBA or Westpac you should seek financial advice.